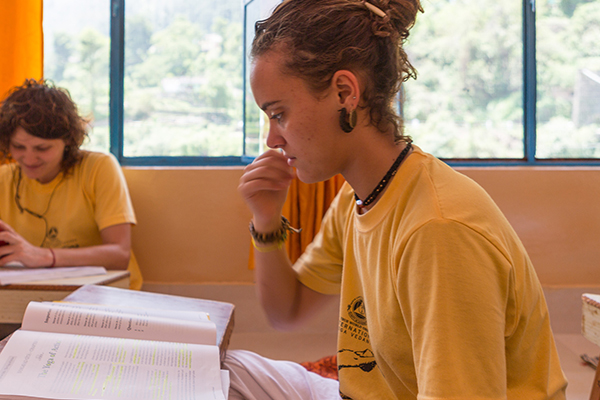 One night a pregnant lioness came to hunt amongst some sheep. When the shepherd saw the lioness he shot at her. The shooting frightened her and she gave birth to her lion cub and ran away into the forest, leaving her cub amongst the sheep. Luckily there was a nursing sheep. She started nursing the new-born lion cub. The lion cub believed that the sheep was his mother, and started to bleat like a lamb—baa baa. He drank milk and ate grass. He became a vegetarian!! He grew up amongst the sheep thinking that he was one of them.

After several years, the king of the forest, a big lion, came to the sheep’s valley to hunt. There he saw amongst the sheep one of his own royal family members bleating like a lamb, eating grass. What a disgrace! He came up to the sheep-lion, “What are you doing here with the sheep? Why are you bleating like a lamb?” he shouted. The sheep-lion was terrified. “Mama! Mama! Help me! This fellow is going to kill me!” But the sheep-mother ran away and the lion caught the sheep-lion. “Don’t be afraid of me. You are a lion like me.” “No no! I’m not a lion. I’m a sheep.” “No, you are not a sheep. You are a lion. I’m going to show you who you really are.” He dragged the cub to a big lake, “Look at your reflection in the lake. What do you see? Don’t be afraid. Just look. See who you are. You have forgotten who you really are.” The sheep-lion saw his face. He didn’t look like a sheep. He saw the lion’s face alongside his. “Hey, I am just like you. You are like me. I am you. You are me. We are both kings!” The lion said, “Then don’t bleat like a lamb. Roar like a lion! Go to your kingdom in the forest and enjoy the rest of your life.” For the first time in his life the sheep-lion roared. No more bleating like a lamb. He had realised who he was and lived happily ever after in the forest, in his kingdom.

Who are the sheep-lions of this story? We are. We bleat morning till night, “baa baa, I’m German, baa baa, I’m Russian, baa baa, American, baa baa, Protestant, baa baa, Catholic, Jew, Arab.” That’s all we do all day long. The lions, the great masters, like Jesus and Swami Sivananda, tell us “You bleat like a lamb. You are not German, Austrian, Russian or American. You are the immortal Self. I am in you. You are in Me. I am He. I am Brahman. You too are Brahman. You too are God. Look within and find who you are.” “No, I know who I am. I have money, two million dollars in the bank, I have my wife and children.” The master says, “That’s not who you really are. These things just belong to you. They’re all objects. Don’t bleat like a lamb. You are immortal. Close your eyes. Look within. What do you see? Pizza, ice cream, bananas, heart beating, lungs breathing?!!  All objects. They are not you. Just close your eyes and breathe very gently. Practise breathing gently every day. Practise. Practise. When there are no more thought waves, what do you see? I am you. You are me. There is neither disciple nor teacher, neither I nor God; we are One. I am That I am. Aham Brahmasmi. So’ham. I am He. I am He. So’ham.