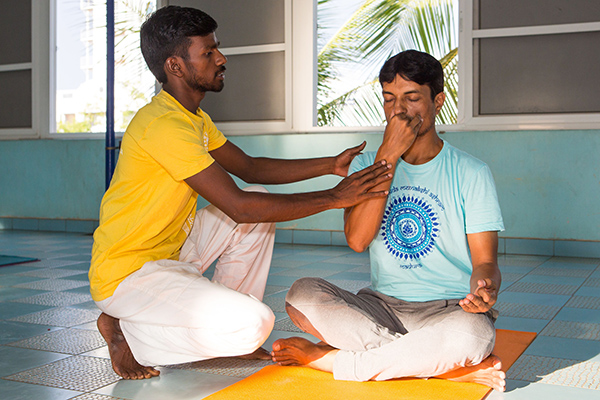 The practice of pranayama, (yama in this context in Sanskrit means control) involves both the extension and suspension of breath, the regulation of the breathing process. Breathing is a semi-voluntary function: it continues automatically, but it also can be regulated consciously or unconsciously. How we breathe is influenced by our habits, thoughts and emotions, as well as by the heavenly bodies and influences our physical health as well as our mind.

Our breathing patterns, because of the poor lifestyle that many of us lead nowadays, have become more or less impaired. Many diseases, both serious and less so, can be traced to poor breathing habits. Shallow breathing, which is how most of us breathe, results in only a small percentage of the millions of air sacs which make up the lungs being used to absorb oxygen and expel carbon dioxide and other waste products. This leads to an imperfect and superficial ventilation of the lungs, with depleted air remaining in the lungs hour after hour and even day after day. Even with thirty breaths a minute, the greater part of the lungs remains unused; there is too much movement and too little real breathing. Such a state of affairs needs correction.

According to yoga our lifespan is measured by the amount of breaths we take. We are born with a certain amount of breaths, whether they are full and deep or short and rapid, one or thirty in a minute. In essence, time itself is measured by the breath. Short, shallow breathing means a shorter life, whilst by lengthening each respiration the duration of our life is automatically extended.

Another aspect of breathing in yoga concerns our subtle or astral body which is made up of vital energy or prana and the channels through which the prana flows, known as nadis. There are many thousands of these channels in the astral body, but the three main ones, which regulate all others, are the concern of one who practices controlled breathing. The even, regular and balanced flow of breath is mirrored in the astral body by the even, regular and balanced flow of prana through two of these nadis, known as ida and pingala—referred in esoteric language as the Moon and the Sun respectively—which are stimulated through the breath of the nostrils. This balance makes the difference between sickness and health. Ida and pingala are stimulated by the breath through the nostrils and as such are under our direct control. Shallow, short breathing means that the pranic currents flow in a sporadic, convulsive  manner and do not pass through the whole length of the ida and pingala nadis as they should. Also, the heart depends upon the mechanism of breathing for its regulation. A considerable amount of energy is wasted in poor breathing patterns leading to a more or less depleted condition.

Yogic breathing is essentially slow, deep and rhythmic, instead of the more irregular and incomplete breathing that is common to most of us: One, two, or four respirations in a minute, instead of many, each using the full extension of the lungs, allowing the prana to pass fully through the two nadis—the Sun through the right nostril and the Moon through the left—reaching the root chakra, known as the muladhara.

Regulation of our breathing can progress as follows.

2) After some practice the exhalation is extended so it is double the length of the inhalation.

Times should be counted on the pulse. Or it may help also to repeat on the rhythm of OM-TAT-SAT-OM so each repetition becomes naturally a multiple and potency of two.

Of course, breathing should always be through the nostrils. From the esoteric viewpoint breathing through the mouth produces a confusion in the pranic currents of the astral body which can lead to some disturbance.

By keeping a daily routine, with a fixed time devoted to slow and deep breathing, the subconscious mind will take up automatically the pattern and respiration will become gradually extended and slowed down little by little. Eventually one will come to breathe naturally no more than four times a minute, thus gaining health and endurance. The ideal should be either one vighati, (24 seconds) or even up to one minute for each breath.

Whenever making a resolution, either mental or physical, this will be done more efficiently and surely by retaining the breath as the resolution is made. Those who are used to the practice of affirmations should repeat them preferably during the retention, or repeat them in time with the three or four phases of each breath, using them to keep the tempo or rhythm.  It is also good to keep in mind that breathing with the left nostril favours mental activity and quiet work. As well, it cools and refreshes  the body. On the other hand, breathing with the right nostril favours physical exertion and hard work and has a warming effect.  Also, during sleep and when taking food it is better to breathe in the Sun (right nostril). During daytime and when doing light work in the Moon (left nostril) is best.