I FIRST MET Swami Vishnudevananda in the fall of 1960. A class was being given in a hotel room. 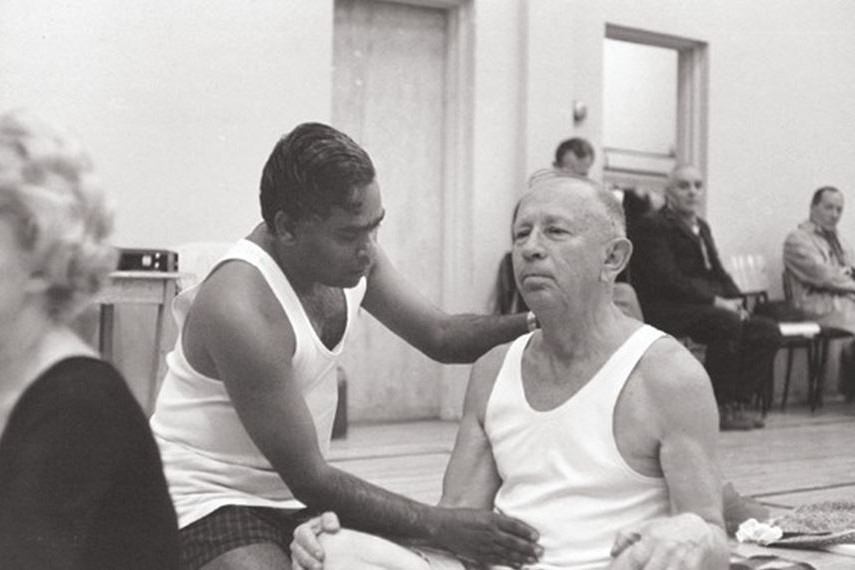 This hotel, on 23rd Street, near Seventh Avenue, was the beginning headquarters of the New York-based Sivananda Center. Our Swami Vishnu did no talking, but was a demonstrator of various yoga postures. The entire affair was so interesting that I left my name and address at the door.

Upon receiving some literature, I joined the Centre, and soon attended every Wednesday evening—the only time and day that classes were offered. There were actually two classes, one at around 5 p.m., the other around seven. Swamiji gave most of the classes, but was breaking in a few others, to help with the teaching of the classes. Swami Vishnu taught his disciples to be real taskmasters.

I was always under the impression that no mercy was to be shown to the students, beginners, or otherwise. Swamiji was always, however, when it really mattered, patient and tolerant, especially when a beginner was having some difficulties. Above all, he had an enormous sense of humor, and had shown himself to be a joker par-excellence.

A year or so later, as more members joined the Center, it was moved to an apartment on 20th Street, near Fifth Avenue and Broadway. By now Swamiji was only teaching a few of the classes, as the other instructors had become capable teachers on their own. Classes were now being given several days a week and the entire Center and its operations were expanding.

Swami Vishnu, now able to leave the Center in dependable hands, was travelling to other Sivananda Centers, primarily in Canada. Another year later, and the house, as we know it, was purchased, on 24th Street, off Eighth Avenue. Tremendous growth followed, and eventually, classes were given every day, usually morning and afternoons.

My closest contacts with Swamiji were in the Ashram, Val Morin, Canada. I went to the Camp year after year during the 1960s and 1970s, first with my father, then alone, then with my wife, and then with my wife and daughters. Swamiji, much to my delight, had my family working hard, and it was particular fun watching him teach my two very little daughters the headstand.

Swami Vishnu could not remember any of our names. However he knew where everyone was from. He would refer to “Hey Chicago, how are you doing today?” or “Hey Minneapolis” , or “Philadelphia, how is it going?” On one occasion he looked at me and asked, “Hey Brooklyn, I know you were having some problems, how do you feel today?” I answered, “Well Swami, my back is much better, my knees seem to be improved, my heart is beating normally, and my shoulder feels better, but Swami, what about ME?”

On another occasion, after the 4 p.m. class was over, Swamiji asked how I was enjoying the asanas. I told him it was like the old Listerine advertisement for the mouthwash—which tasted horrible “I hate it, twice a day.” As I was saying goodbye, preparing to return to New York, he asked how I enjoyed my stay at the Camp. I told him that for the entire two weeks, all I could think about was going home. As he looked disappointedly toward the ground, I then mentioned that now, for the next fifty weeks, at home, all I would think of, was next year’s return to the Ashram.

You should have seen the smile on his face. Well, we will all certainly miss our own Swamiji. His enthusiastic interest in people, their problems, and in helping them, is unparalleled. Who can forget his “Flying Swami” peace mission of the early 1970s or his incredible trip over the Berlin Wall in 1984. Most of all however, we shall always remember and revere his seemingly infinite energy. He travelled to where he was most needed, to help continue the world peace movements. Let us pray that his many loyal disciples will successfully continue his efforts. 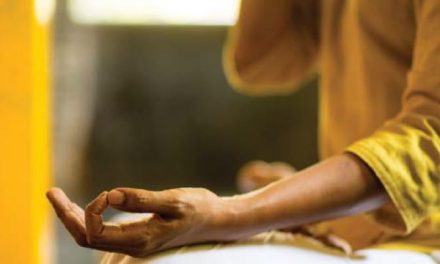 Sadhana Intensive: A Journey We Took 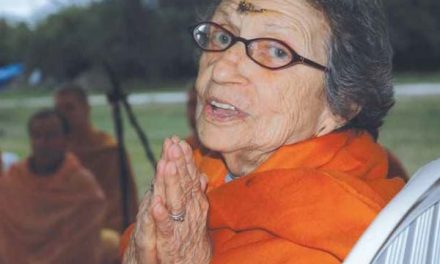 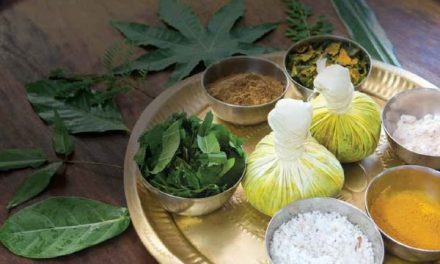