After 30 days of hard work during the Advanced Teachers’ Training Course (ATTC) in Rudraprayag, the words “Unity in Diversity” made complete sense to me. Everything did. 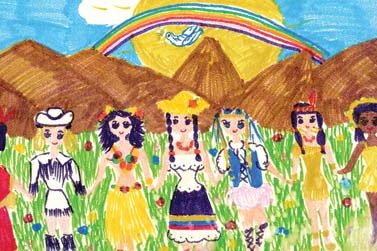 As a child I loved to paint using all possible colours to capture, on a piece of cardboard, my favourite things: the sky, the sun, the clouds, the mountains, the rainbow and all flowers. The theme of my little “works of art” changed over the years. First, I used to paint a house with a fireplace (despite the fact that I was born in a city whose climate, year-round, is 30 degrees Celsius).

Then, I started painting my family and, finally, at the end of my “artistic career”, I made a series of paintings about the peace of the world. These scenes, except for some subtle variations, were always the same: beautiful and happy girls from different countries, dressed in the costumes of their regions, and holding hands as a symbol of union.

My dream from childhood materialised over 30 years later, one evening in Rudraprayag (India), when I had forgotten that it was my soul’s deepest desire, and when I had terminated my love for art. It was six o’clock in the afternoon and I was starving. The ATTC was coming to its end and I felt exhausted.

While I was walking toward the terrace of the Monal Resort, where our meals were served, I thought: “I hope my colleagues will not start reciting mantras now because if I don’t eat something in the next minute, I’m going to faint”. What I feared, happened. As soon as I got to the line and took my plate and spoon, some people started to hold hands, forming a circle.

First, there were five. Then, ten. And within seconds there were nearly 40 students, smiling and holding hands, ready to pray next to the buffet (that smelled and looked delicious).  Just to be polite, but without much conviction, I joined the group.

All of us together, holding our hands with love, intention and intensity, while those who knew the prayer from the Bhagavad Gita recited:
Brahmaar panam Brahma Havir
Brahmaa gnau Brahma naa Hutam
Brahmaiva Tena Gantavyam
Brahma Karma Samaadhinahaa

That “JAI”, lifting our arms while still holding our hands, in a single voice, in one cry; just that one second crystallised 30 days of experiences and learning for me and gave sense to everything: Tat Tvam Asi, sutras, neurotransmitters, Sat Chit Ananda, serotonin, cortisol, 12 pairs of cranial nerves, synapse purusha, the mahavakyas, kaivalya, samadhi.

There, wearing our yellow and white uniforms (instead of traditional costumes), we all were one, we all were Brahman, we all were God, like the waves of an ocean, but grounded in the Earth and with our hearts opened. There and then I experienced the feeling of the Absolute. In a second, I saw my whole life like it was a movie and it all, finally, made sense. In a second, I felt the OM in each one of my cells.

I had never before felt so much love within. Around us, the mountains, the sky, the sun, the flowers, we, I, God. For the first time I felt the unity with everyone and every – thing, and I understood, more than 30 years later, that desire which has always dwelt in my soul. This, what I perceived as emptiness, was my need for unity. This, the unity, my reason for being; my purpose in this life.

And because nothing is a coincidence, there I also understood that Sivananda’s organisation had come into my life for me to be part of Swami Vishnudevananda’s dream: to build peace in the world through the practice of yoga. There, next to the Ganges River and the Himalayas, I felt for the first time that I was where I wanted to be, where I needed to be and I was so intensely happy then that even now, months later, I still am so.

Not until that moment did I understand the goal of the Sivananda Organisation, as Swamiji conceived it. It is much more than providing yoga courses. We are much more than yoga students and teachers. We are instruments of peace because we have experienced the feeling of unity.

I know that each one of us, now that we are back in our home countries, will have a deep sense of our responsibility to share with the world that state in which body, mind, and soul are one – more than giving information and techniques. That’s yoga and that’s my first step towards peace in the world. And because nothing is a coincidence, there I also understood that the Sivananda organisation had come into my life for me to be part of Swami Vishnudevananda’s dream: to build peace in the world through the practice of yoga. 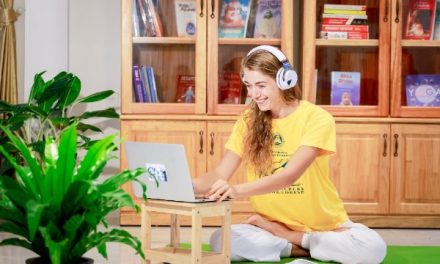 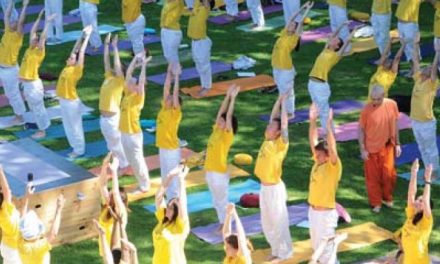 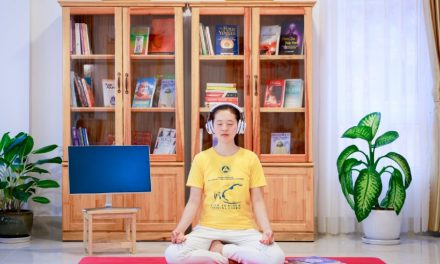 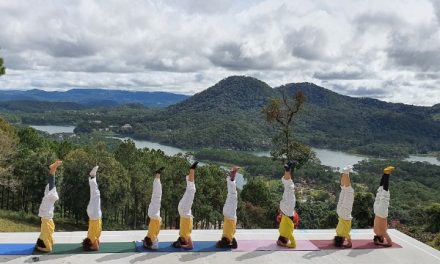