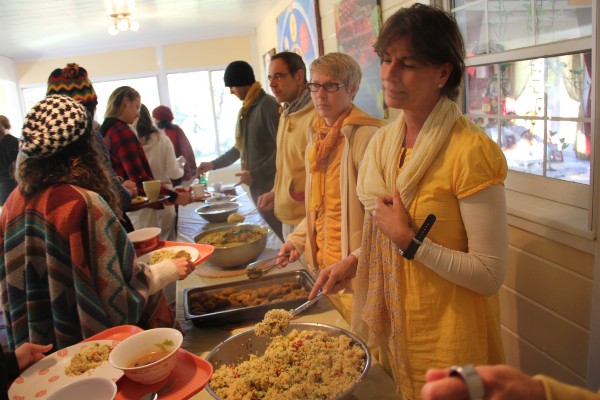 The practice of karma yoga is essential in order to see your progress on the spiritual path. God puts you in different circumstances for your own good—to test you.

Let me tell you a story. A young man, a brilliant student, came to a great master and asked, “Oh Master, I don’t want anything from this world. I’m tired of this world. I want to see God. Please initiate me. You’re a great master and your initiation will immediately bring me realisation.” The master told the young man to come the following day at 4 a.m. to receive initiation. He told him, “Be ready. Take a bath and at exactly 4 a.m. come. Don’t be late. This is the auspicious time when the planets will be in the right position. Don’t be late.”

“Oh Gurudev, I’ll be there,” the student promised. He didn’t sleep all night. At 3:30 a.m. he went to the Ganges for a bath. He took his bath and changed his clothes. He was a brahmin boy. You know that being a brahmin, he was raised in the priestly life. In those days, an untouchable would not be permitted to come within one hundred yards of his priestly house. They had to stand away at a distance and shout, but they were not allowed to come in. Nor could he go anywhere near them. If he even went near an untouchable, he would have to take a bath because he was considered “polluted.” If his father or mother saw that he went too near an untouchable, they would not admit him back into the home until he had taken a bath. You’re made to feel polluted, so you just automatically go and take a bath if there has been even distant contact. Having been brought up in such an orthodox family with these strict rules, the brahmin boy prepared himself for his holy initiation. Carrying flowers and fruits, he started on the path to the master for his initiation.

The previous evening, the master had called an untouchable sweeper in to see him. All the menial jobs were done by the low class untouchables. The master called the sweeper and gave him instructions: “At 4 a.m., the young brahmin boy will come to take a bath in the Ganges and to get initiation from me. When he comes, in the darkness, just touch him gently with your broom.” What instructions from a great master! A sweeper would never do such a thing—it was unthinkable for an untouchable to go near a brahmin boy, especially with his broom.

Obeying the master’s instructions, the sweeper pretended to be sweeping the street in the path of the boy returning from his Ganges bath in all his holiness—with all new clothes, holy ashes everywhere, a fresh garland of flowers and all the great devotion for the master. As he passed, the sweeper came and gently touched him “accidentally” with his broom. That meant that the boy was now polluted and could not go for initiation. He was outraged. He looked at the sweeper shouting, “You stupid, wretched rascal. How dare you touch me with your dirty broom? Do you not know that I’m a brahmin boy. I was going for initiation and now you have made me dirty. Now I have to take another bath and do lots of pranayama to purify myself. It will take at least fifteen minutes of purification!” He was so angry. He scolded the sweeper left and right and ran back to the Ganges for another bath. He chanted furiously the purification mantra, Om Bhur Bhuva Swah… He had to repeat all the mantras he knew. Imagine what a big job it was to remove all the impurities contracted from touching an untouchable!!! Despite all his efforts, the boy arrived fifteen minutes late. The master had told him to come at 4 a.m. sharp, but it was now 4:15 a.m. “Oh my son, you are fifteen minutes late. You were supposed to be here at 4 a.m. The auspicious time has passed. Now I can’t give you initiation until next year.”

“Ugh, one more year! But Master, it wasn’t my fault. That stupid, wretched rascal untouchable, who has no respect for brahmins, came and touched me with his broom; I had to go and take a bath to purify, and chant the Gayatri mantra before coming to you for initiation. I couldn’t come to Master’s feet with all the impurities of that wretched untouchable. So, I had to do all my purification again; that’s why I am late. It wasn’t my fault.”  “Well son, I won’t initiate you now. It is not the right time. You will have to wait one whole year.”

“Oh my God, what a thing to happen to me,” the boy thought. So, he did karma yoga for another year…. The next year the master instructed the same sweeper, “This time don’t merely touch him with your broom, actually hit him with your broom—‘accidentally,’ of course.” So the brahmin prepared himself elaborately once again for his initiation. As he came up from his bath to meet his guru, he again crossed the path of the untouchable. As instructed, the sweeper sent flying his dirty broom with all its filth and the brahmin boy was dirty again. “My God, you did the same thing. How could you?” The boy scolded him again, but not so much as the previous year. He ran off quickly, jumped in the Ganges but was still three minutes late. The master said, “You are late again. You will have to wait again another year, my son.”

It went on year after year in this way. That boy never got his initiation, but continued with his karma yoga. Then one year, he did not come to ask the master for initiation, because he knew something would happen to prevent it. But the master called him anyway. “You know, tomorrow is the initiation day. Please be there on time.”  “Yes Master, if you say so,” the boy replied. So he went and took his bath in the early morning. This time the master said to the untouchable, “Take a whole bucket of that nice soil over there and pour it all over him.” This time the sweeper poured the whole bucket of nice soil over the boy, just as he was told. But, this time the brahmin boy did not scold. Rather, he said, “Thank you.” Without taking any bath, without saying any other words but thank you, the boy approached the master—covered in filth—in the same prayerful state as when he had finished all of his purification… and on time. The master saw that though the boy came with all the filth, he had not reacted to the insult. He never even saw the untouchable sweeper.

The master said, “Now you are ready for your initiation. You are ready because you have conquered anger, conquered the idea that you are a superior brahmin, and that the other is a stupid, illiterate untouchable.” The boy no longer saw the difference. His mind was purified by the years and years spent in karma yoga. Like gold which is repeatedly put into the fire, beaten and then placed in the fire again, the impurities had been removed by the karma yoga. The boy’s mind had been opened, and now when he repeated the mantra given by the master, there was no obstruction. By the time he repeated A, the kundalini energy had started rising. With the sound U, the energy had already reached the ajna chakra between the eyebrows. By the time he got to M, he had already gone into the transcendental state. Just as only one small tiny flame is sufficient to ignite dry hay and the whole haystack instantaneously goes up in flames, the boy immediately entered into the state of samadhi.

This story illustrates that purification is necessary. The ego must go. Even great teachers can’t do anything for us when we have this ego. When I arrived the first time at Sivananda Ashram in Rishikesh as a very young man, I wanted to do more pranayama and meditation. Master Sivananda told me to wash the clothes of people staying in the Ashram, in the Ganges. I thought “My God, I don’t even want to wash my own clothes. That’s a menial job. I have never done that kind of job. I came here to raise my kundalini, not to wash clothes.”  Well, that ego must go and only then will the energy come. This is the meaning of karma yoga.